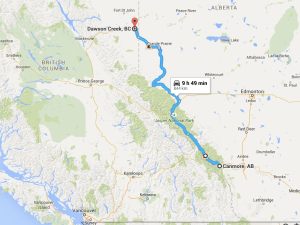 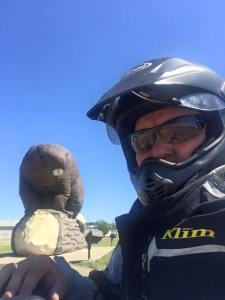 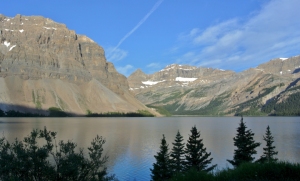 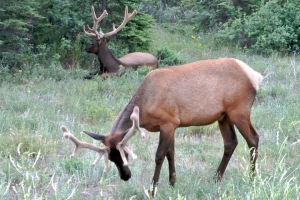 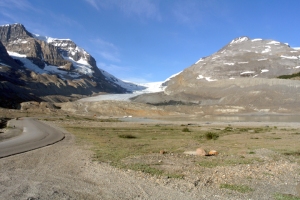 I woke up in my Canmore cabin at 4:00 am and stared at the ceiling for half an hour before deciding that since I wasn’t going to get any more sleep, I might as well hit the road. I loaded up the bike and was on the road at 5:30 as the sun was coming over the mountains.

It was an early start, but here’s the thing, before I can turn around and start heading south, I have to go north; a very, very long way north. I figured I might as well get started.

Inuvik, where the road runs out near the shore of the Arctic Ocean on the Mackenzie River Delta, is the spot where I plan to turn around and head back south (not many other options, really). It sits at 68° North latitude and is 2200 road miles away. Incredibly, it is 400 miles farther from Canmore to Inuvik than from Canmore to Tijuana, Mexico. It’s a long haul.

The good news is that the road to Inuvik passes through some of the most jaw-droppingly beautiful scenery on the planet.

I rode through Banff National Park as the sun crested the mountains in the east and gradually flooded the Bow Valley with sunlight. At that hour of the morning, I had the road to myself. This was to be short-lived, however, as the summer tourist traffic began to appear in droves and I was soon sharing the road with an armada of cars, RVs, buses and fellow motorcyclists. This usually isn’t a problem until somebody does something stupid.

As I rounded a blind curve, I found myself facing the rear end of a Nimitz Class-sized RV, stopped in the middle of the highway, its occupants aiming cameras at a family of bighorn sheep. I was able to pass them on the shoulder (where they should have been) and continued on. I reminded myself that most drivers are probably paying attention to the scenery and not the road and decided to ride with that fact in mind.

Soon I was out of the mountain parks and into rolling forested foothills, then following the plains along the eastern edge of the Rockies toward British Columbia. I passed timber mills and oil fields, farms, factories and mines. I reached Dawson Creek, British Columbia at the end of an 520-mile day, and although I’m exhausted, the ride didn’t feel that far at all; which is a good sign, I guess. 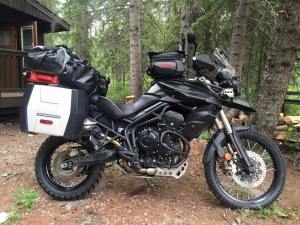 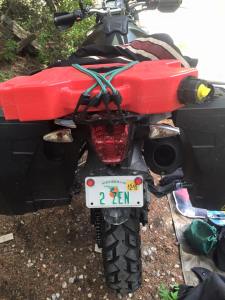 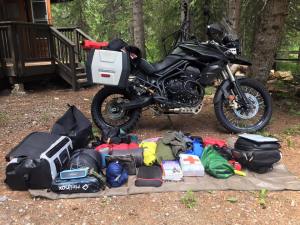 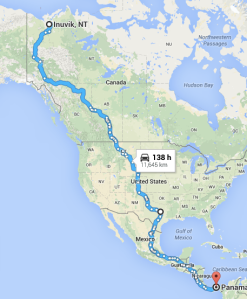 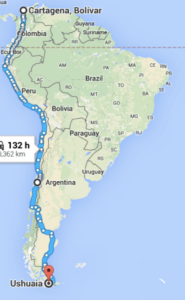 About a year ago I decided to take a road trip. From one end of the world’s longest road to the other. On a motorcycle. Alone.

I’m planning to leave tomorrow morning and have spent much of my time over the past year planning, choosing gear, organizing insurance for both the bike and myself, and spending more time in the travel medicine office than I would have liked. I pored over books and visited countless adventure cycling websites. I have devoted hours to reading the blogs and websites of those who have attempted this trip before. Despite all of this I feel woefully underprepared.

Perhaps that’s part of the appeal.

Even though, on some level, I know what to expect, on another level I have no idea what to expect. It is an awfully long road, after all; from above the Arctic Circle at Inuvik in the Northwest Territories, Canada to Ushuaia, the southernmost city in the world at the tip of Tierra del Fuego. If all goes well I’ll be putting close to 30,000 miles on the Triumph Tiger 800xc through tundra, mountains, deserts, and swamps while carrying enough clothing and gear to serve me in all of those locations. I have to carry camping gear. I’ll be carrying electronics and cameras (and the attendant mass of appropriate cables and chargers) to document the trip and stay in touch with folks back home. At the same time, there are some serious weight and space constraints. Having never attempted anything like this, I’ll be learning as I go.

With less than 24 hours until go time, I’m feeling a serious case of the nerves. At the same time, I’m excited and happy.

The easy part is behind me. The hard part starts tomorrow.