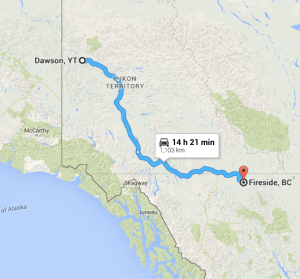 I’ve been riding through the Yukon Territory for two days and I still don’t know whether it’s called Yukon Territory, the Yukon or simply Yukon. I guess it doesn’t really matter in the long run. In any case, it’s awe-inspiring country.

I don’t know why, but in my mind’s eye, I had always pictured the Yukon as a vast, frozen and featureless expanse of ice and snow. I realized after arriving here that somewhere in my brain, I must have gotten the Yukon confused with the North Pole.

Sure, it’s vast. In fact, it’s vying for the top spot in the vastness department of any place I’ve ever seen. And, yes, for a good portion of the year it is a frozen expanse of ice and snow; but it is anything but featureless. It is an amazing landscape of valleys, mountain ranges and enormous rivers and lakes that everyone probably would have heard of if they were located anywhere south of here.

I ran into a friend in Whitehorse. I met Dana Meise two years ago in Canmore. He stayed at my cabin for a few nights while waiting for some gear to be shipped from his sponsors to help him in his quest to become the first person to hike all 16,500 kilometers of the Trans Canada Trail. He’s since achieved that goal and is now hiking the northern trail all the way from Whitehorse to Tuktoyaktuk.

I’ve been following his progress on his page, “The Great Hike,” and realized we’d be in town at the same time, so we arranged to catch up over a couple of beers.

Dana has a book coming out that will chronicle his journey. He passed on some advice that his publisher gave him about taking the time to experience the people and places along the way.

“Nobody wants to read about how many bunny rabbits you’ve seen and you can only write about the pain in your feet (or in my case, butt) so much before it gets tiresome,” he told me. For the record, I’ve seen four bunnies so far in case anyone does actually care.

I feel like I’ve been furiously clicking off the miles since I left Canmore, so I’m going to try to take that advice to heart. With that sentiment in mind, I plan on taking advantage of my early arrival into Dawson City and stop and smell the roses; the roses in Dawson City being an infamous shot of whisky with a mummified human toe in it at the Downtown Hotel, perhaps followed by a burlesque show. Hopefully it won’t run late, because I need to be in bed early.

I’ll need the rest because the next stretch of road is the Dempster Highway, an arduous 735 kilometer stretch of gravel and dirt that extends well past the Arctic Circle and continues all the way to Inuvik. Ooooh, sounds daunting…