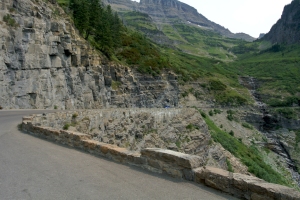 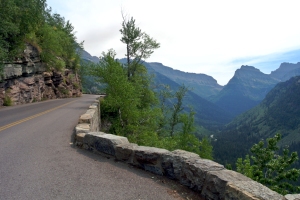 It was good to get some maintenance done on the Triumph and a bit of rest, but I felt like I was losing inertia sitting in one spot for so long. I needed to get on the road and start the trip south before some project around the house cropped up and cost another day. I probably could have picked a better weekend to leave.

I hit the highway on the first Saturday of the long Heritage Day weekend, when the entire population of Alberta piles into their vehicles and gets on the road. I travelled amidst a constant stream of RVs, trucks pulling fifth-wheel trailers, boats and jet skis, motorcycles (both ridden and strapped in the backs of trucks), and minivans with smeary back windows loaded to the rafters with luggage. I felt like we were all travelling the same direction. It turns out that we were. Northern Montana near the Glacier National Park region is terribly popular at this time of year.

I arrived in Whitefish, Montana at round 8 o’clock PM. The first signs that it might be tough to find a spot were the “Full” signs at the campgrounds on the outskirts of town. The motels flashed “No Vacancy” signs at me as I rode past. I was turned away at each successive place and ended up riding to the next city of Kalispell. Eventually, I paid $150 for a room in one of those timeworn motels that advertises “Clean Rooms!” as a selling point.

I woke early and headed for the Going to the Sun Road through Glacier National Park. This iconic ride has been taunting me for years. I’ve driven past it half a dozen times and every time it has been too late in the season and snowbound. Since I first saw stunning photos of its impossible curves I’ve had the desire to experience it for myself. It didn’t bode well when the story on the front page of the Daily Inter Lake was about the two to three hour expected delays on the road due to holiday crowds and the fact that half of it was closed due to forest fires. I decided that I’d come this far and crowds and fires or no, I would ride whatever portion of the road I could.

Joining the parade of holiday traffic, I rode toward the park past the strip malls on the outskirts of town, into the country side and through the dusty clouds kicked up by combines working fields in the dry summer heat, and toward the mountains on the horizon. I rode through small towns and past innumerable churches (many of which seemed to be of the “fire and brimstone” variety) and so many roadside memorial crosses that I actually passed a man selling roadside memorial crosses out of the back of a truck. Soon I pulled through the front gates of Glacier National Park.

The Going to the Sun Road is a vertigo-inducing ribbon that winds its way through the park, clinging impossibly to the sides of cliffs and climbing its way to the clouds. The guardrail is stone and only a foot or so high, thus the high riding position of the motorcycle put the soles of my riding boots just about even with the top. The sensation was akin to flying and one of exhilaration and height-induced wooziness. The urge to crane my neck to admire the scenery was kept in check by the mental image of the motorcycle sailing over the rail and into oblivion. Even with the crowds, it was well worth it. I would love return to visit the closed portion someday, although I think I’ll do it in my car and on a weekday.