If General Santa Anna had been forced to navigate the maze of San Antonio’s one-way streets he undoubtedly would never have found the Alamo and Davy Crocket might have gone on to open a successful raccoon-fur hat shop. Additionally, if Lee Harvey Oswald had gotten as lost as me on his way to Dealy Plaza and ended up circling the Dallas Zoo through the barrio for an hour and a half, JFK would have made it to his luncheon.

It took me 7 days to get from well above the Arctic Circle to the U.S./Canadian border. It’s taken seven times that long to get across the United States to the Mexican border and it feels like half of that time was spent driving lost through Texas. 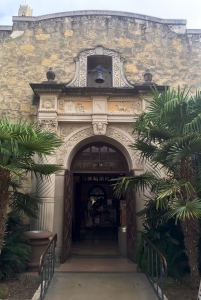 The slow progress during this portion of the journey has been due to time spent in Canmore, repacking and having some work done on the motorcycle. Another two weeks were spent in Colorado, visiting friends and touring the state. I flew back to Florida for a week to take care of some last minute business before leaving the country, and that trip was bookended by several days in Denton, Texas visiting with my sister and brother-in-law. I had great visits with everyone and am grateful for the opportunity. The only problem with these pleasant diversions is that they really tend to take me out of my rhythm.

I find that it takes three or four days of riding consistently to really get into the swing of things, especially tasks like packing and unpacking every night and staying organized in constantly changing environments. Since the only consistent thing in my life at this moment is that routine, the routine itself becomes very important. That is why I was so eager to get back into the rhythm of the road and that’s what made my directional misadventures all the more frustrating.

It’s very difficult, not to mention dangerous, to check maps in hectic city traffic. This reality led to an extensive unplanned tour of Dallas. A wrong turn somewhere near Killeen took me through the middle of Austin on I-35 at rush hour in crushing heat and bumper-to-bumper traffic, and I was forced to navigate out of San Antonio by keeping the morning sun on my left.

However, when I wasn’t busy negotiating the sprawl of Texas’ major metropolitan areas by dumb luck and solar reckoning, I did find some blissful stretches of nearly empty two-lane byways. Rolling through the countryside at 80 miles-per-hour with nobody for company but the occasional hawk or lizard was a great feeling of freedom, especially after my admittedly self-inflicted urban misadventures. Eventually, I pulled into the border town of Laredo and as I write this I can look out of my hotel window across the Rio Grande into Mexico.

I plan on crossing the border in the morning. Since the crossing is only a few hundreds yards from my window, I’m fairly confident I won’t get lost between here and there. Then we’ll see what happens.

One thought on “The Lone Star State of Confusion”