I will stick to descriptions of the positive aspects of this beautiful and unique country in this post, since in my last post I made my feelings for the Mexican authorities sufficiently clear. I also did some digging and found the name of a Mr. Gerardo Llanes Álvarez, the Executive Director for Marketing of the Mexican Board of Tourism. I printed, addressed and mailed a respectfully worded letter wherein I expressed my displeasure. I also suggested that the behavior of his country’s police force may be diminishing the return on his department’s outlay of tourism advertising dollars. Now I feel I’ve gotten it out of my system and so away we go. 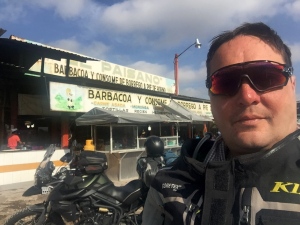 There are two routes to Acapulco, “couta” and “libre,” or “toll” and “free.” I can’t speak to the condition of the free road, but the toll road, the Autopista del Sol, is a brand new, highly maintained very high-speed highway through the mountains between Mexico City and Acapulco. While zipping and winding over the terrain, one crosses a number of impressive cable-stayed bridges, the crowning achievement of which is the Puente Mezcala which spans the Mezcala River a dizzying 600 feet below.

I made excellent time, left the toll road near the city of Acapulco and was greeted at a checkpoint by no less than 25 soldiers and police officers carrying automatic weapons of varying calibers. Others armed with .50 calibers were ensconced behind sandbags. I immediately and sensibly pulled over when they flagged me down. This crew was very professional and I dealt with a middle-aged, no-nonsense gentleman in a polo shirt, baseball cap and chinos who spoke excellent English and struck me as the type that may have picked up some of those language skills in classes at Langley. He examined my driver’s license and asked if I was travelling alone. When I said that I was, he returned my license and, after giving me directions, suggested that it would be in my best interest to proceed directly to the hotel zone and enjoy the beaches there.

I followed the directions and made it easily to the hotel zone with the exception of turning up an unmarked one-way street which caught the attention of a traffic cop. I was informed that this was a $100 ticket, but $25 now would make it go away. This was an ordinary traffic cop without even a gun, therefore his rates were much more reasonable.

At this point, a tropical squall kicked up, reminding me that I’d passed the Tropic of Cancer many miles ago. I have now ridden from well above the Arctic Circle to well into the tropics and I couldn’t help feeling some accomplishment in that.

When I arrived I found the Grand Hotel nearly empty. I was definitely the only anglophone guest there and the fact that the halls were big enough to drive a car through made it feel even more empty. I decided to check out the neighboring karaoke bar, but it was even less populated. The owner, bartender, DJ and I were the only ones in the place and since the prospect of singing karaoke under such circumstances seemed preposterous, I sat with the owner for an hour, drinking tequila and watching 80s videos on the big screens. We decided that Phil Collins is pretty great, Toto is pretty ridiculous and that we would both like to have a canary yellow suit like Rod Stewart. I decided i’d had enough tequila at that point and headed back to the hotel.

The road out of Acapulco follows the Pacific coast on an inland track with occasional glimpses of the ocean through the trees and over the hills to the right.The route is lined with palms, thatched palapas, tiny restaurants and roadside roadside fruit stands. This slower pace gives it a distinctively more laid back Central American or Caribbean vibe. Both are places where I’ve spent a good portion of my time over the past decade and I immediately began to feel more at ease.

The roadside fruit stands selling bananas, melons and coconuts are a treat. North of the border(s), when I was feeling tired and dehydrated, I would pull into a gas station for a Cliff Bar and Smartwater, an engineered pre-packaged energy food and a synthesized electrolyte drink in a plastic bottle. This seems like a very American thing to do. Now when I feel tired or dehydrated, I can pull over for a banana and coconut milk, a naturally prepackaged energy food and an electrolyte drink that comes served inside the nut where it was born. I also got to ride my motorcycle through both a river and a hotel lobby in the same day, therefore it was pretty good overall. 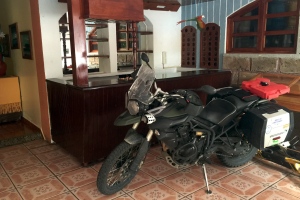 So, Señor Álvarez, if you did receive my letter and are reading this right now,”Esos días en su país eran muy tranquilo. Muchas Gracias.” I’m still serious about you needing to rein in those crooked cops, though.