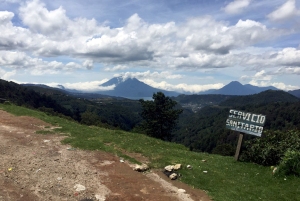 After barreling through Mexico at a record pace in an attempt to minimize my time there, I have decided to ease the throttle back a bit and spend a few days enjoying Guatemala. In some ways, I have no choice in the matter as I have given up on trying to get anywhere fast here. Although every route looks pretty manageable on the map in this country, the reality is that I have had to create a highly scientific system whereby I take my estimate of how long it should take, multiply by 2.5 and figure on it taking somewhat longer that that.

The same features that make Guatemala such a beautiful place also make for some difficult navigation. I spend about half my time lost and the other half not knowing where I am. For example, I tried to visit some friends of a friend in a town called San Pedro, on the shore of Lake Atitlan. On the way to the shores of the lake I ran into another protest roadblock. This one was in a farming community where the farmers were angry about the results of the recent elections. They had blocked the road with rocks, boards with nails in them, and rope. While this was an inconvenience, they struck me as genuinely disenfranchised indigenous folks from an agricultural community for whom this was the only means of protest so it was hard to be too annoyed with the delay. I turned around and attempted another route to the lakeshore. 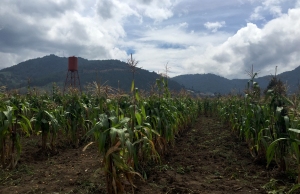 The GPS indicated a road running along the shoreline to San Pedro. Unfortunately, my GPS did not get the message that rising lake levels had swallowed this road up. I headed back to the highway to try another route, an insane series of switchbacks that drop 4000’ in elevation from the chilly highlands to the edge of Lake Atitlan. I considered giving up. In hindsight, I’m very glad I didn’t.

Eric and Angie are a great couple who recently relocated to San Pedro from the states. While volcanoes and grizzly bears and Dennis Hopper’s grave are all well and good, the real pleasure is in meeting new people and making friends along the way. I spent a couple of days in San Pedro with my new friends, eating and drinking, being merry, and swapping stories.  As an added bonus, Angie, a massage therapist, was able to work thousands of miles worth of knots out of my arms, shoulders and back. It would have been an easy place to spend a week or a month, but I have a lot of miles left to cover so I said hasta luego to San Pedro and got back on the road. 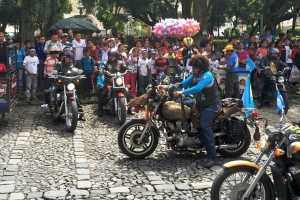 Guatemalan Independence day is September 15th and the festivities in Antigua have already begun. I’m sharing a hotel with the Buffalo Motorcycle Club from Puerto Barrios, Guatemala. They are a rowdy, but fun and friendly bunch that likes to stay up late and get up early, fire up their motorcycles, ride to the town square and whoop and holler. Their club leader has an old cruiser-style motorcycle that is upholstered with cow fur, has a skull for a front fairing, an actual cow tail hanging from the rear fender and a saddle for a seat. It is also equipped with a high decibel horn that sounds like he may have gotten it off of a lighthouse and is designed to sound like the world’s loudest cow. Neither getting to sleep early nor sleeping in are options for me at this point.

Tomorrow morning I plan to wake up early to the sound of Harleys and foghorn mooing and head to the border of El Salvador. I figure it should take about four hours, times 2.5 plus an hour or so.