It was shortly after 10:00 pm when the hotel room at the Hotel Antafogasta, and by extension, a good portion of Chile’s northern coast started shaking. I’ve experienced the sensation once before during my life while living in San Diego, but it took several seconds before my brain registered it as an earthquake and by that point the motion was subsiding. BBC World news was on the television (typically the only English-speaking channel I’ve been able to get), so I watched the crawl across the bottom of the screen for any breaking news about an earthquake in Chile. Surely an earthquake would rate as newsworthy, right? Apparently, not.

After a few minutes, I fired up the laptop and Googled news for “Chile Earthquake” and learned that the main event had been a 6.8 quake the night before. This was a mere aftershock. The main quake, however, had prompted tsunami warnings along the coast. Though the tsunami warnings had since been lifted, this presented an unsettling new concern that I hadn’t even considered. It seemed like a nice hotel, though. It seemed like the type of hotel that would be decent enough to sound some type of alarm if it was in any danger of being washed out to sea, so I flipped off the television and went to sleep. 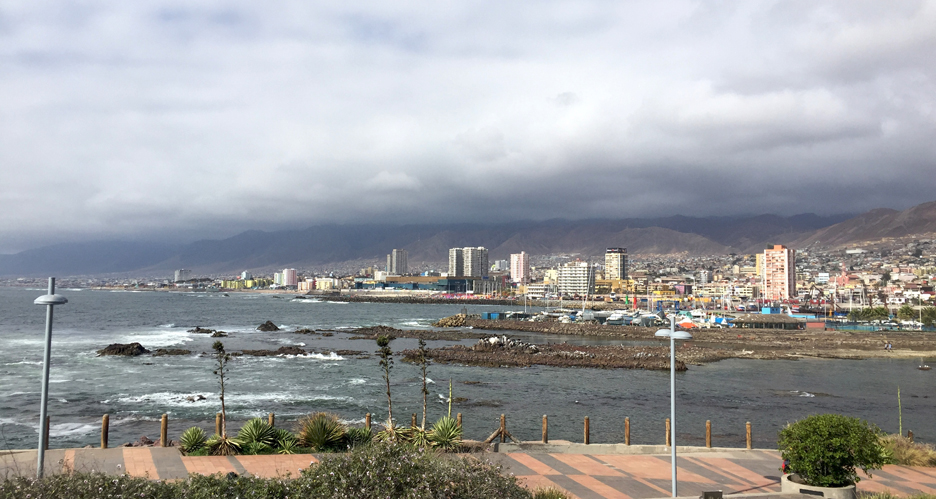 The night before, while the main earthquake happened and the tsunami warnings were being issued, I was sleeping under a huge pile of alpaca fur blankets in a freezing cold outpost on the Chilean side of the Bolivian border called Ollagüe. It didn’t have much to offer, except for exactly what I needed after crossing Bolivia, and that was a comfortable place to sleep. The bike started fine in the morning, but refused to run at idle which meant I had to constantly apply a bit of throttle to keep it going. I could ascribe this to the freezing temperatures and the fact that this “town” is 5,868 m (19,252 ft) above sea level, which may have been playing havoc with the Triumph’s electronic fuel injection system. I think the more likely cause is that bad JuJu from the “Bolivian Motorcycle Curse” was still leeching across the border. At any rate, after 200 km through the desert on roads ranging from excellent to horrible, I stopped for gas in the city of Calama and the situation remedied itself.

From Calama, the road led through the gusting winds of a high desert and past huge mining operations to the tremulous town of Antofogasta. The following day held similar scenery on the road to the charming beach town (in a “rough around the edges” way) of Chañaral, were I was treated to yet another aftershock. From Chañaral the road followed a coast remarkably similar to that of Southern California before turning inland again and across the Atacama Desert.

The Atacama is the driest desert on earth and riding across it is a completely otherworldly experience. It stretches for hundreds of kilometers and sky is so blazingly blue and the soil so uniformly red, it really does feel like riding across the surface of another planet. There was the occasional bird in the sky, but hours of riding through such a landscape, without so much as a tuft of grass, was downright eerie and weird and beautiful all at the same time. 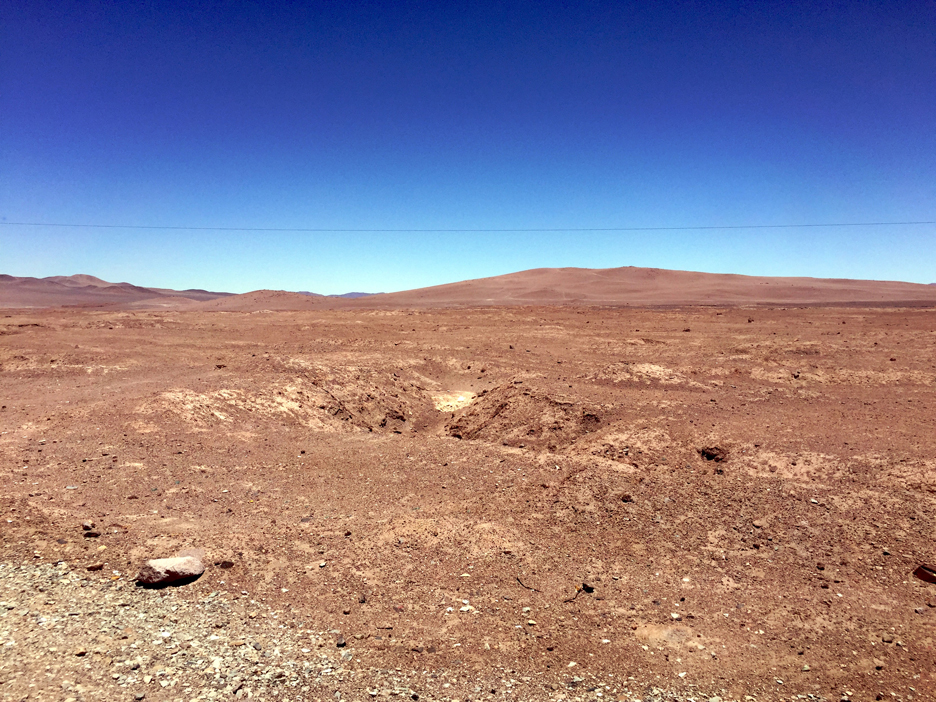 After crossing the desolation of the Atacama, I arrived in Santiago where I was promptly run into from behind by a woman in a white Hyundai. It was a slow speed incident in the middle of the city in stop and go traffic and there was no damage, but the bike did go over. Luckily, four cops appeared as if they had simply materialized. One seemed to be lecturing the woman on the importance of not running over motorcyclists, while one asked if I was damaged in any way, and the other two righted the bike and sent me off again into the rush hour traffic of Santiago.

The motorcycle needed a little scheduled maintenance and, since Santiago has a first rate Triumph dealer, the bike went in for a couple of days, leaving me free to explore the city.

My friend, Dan, was also in town. After sinking into the mud of the Bolivian salt flats, the mechanics further north in Calama were unable to fix his bike. This required him to hire a truck to ship the bike to the BMW dealer in Santiago while he slept through the Atacama Desert in a bus. He’s going to try to get the machine fixed and revisit some of the places he missed, but at this point, the motorcycle had become a large, expensive, and inconvenient piece of luggage rather than a form of transport. I hope he gets everything squared away in Santiago.

While the bikes were getting looked after, we were able to catch a World Cup qualifying soccer match between Chile and Colombia, and attend a Creedence Clearwater Revisited concert which consists of the members of the original band that aren’t currently suing each other.

After picking the bike up from Triumph and thanking the team there for the quick turnaround and warm reception, I felt a renewed confidence in the machine. This is a good thing, as there are still a couple of thousand miles of Patagonia to go before I get to the edge of the world.

2 thoughts on “The Skinny on Chile”