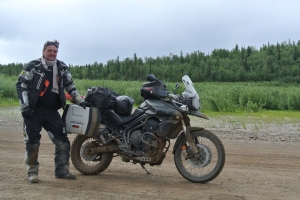 I’m on top of the world at the moment! Well, not technically the very top, but to get much farther north from here would require either dog sleds or a nuclear submarine. 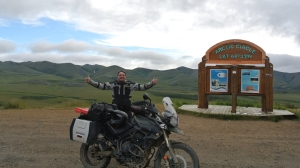 The town of Inuvik, population 3,400, lies two degrees above the Arctic Circle in the Northwest Territories. The next closest city, Dawson, lies 774 kilometers to the south down the dirt and gravel Dempster highway. That’s roughly the distance between San Diego and San Francisco and, with the exception of a few tiny settlements, there is virtually no population in between except for the caribou, grizzly bears, arctic foxes and other creatures adapted to survive in these unforgiving climes. 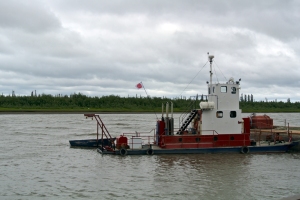 The town is built on permafrost and one of the notable features of the town is a network of corrugated steel conduits built above the ground called the “utilidor system,” designed to prevent the city’s water and sewage systems from freezing. Incidentally, the Dempster highway is also built on an insulating layer of gravel between 3 and 7 feet thick to prevent the road from heating up and sinking. During the summer, ferries cross the Peel and MacKenzie rivers. During the winter the rivers become ice bridges. During the fall and spring, while the ice is freezing or breaking up, the town is cut off by road. The sort of ingenuity that conceives of systems to keep sewage from freezing and roads from sinking into the tundra is characteristic of the people that live up here. It is, after all, a survival trait. Another survival trait appears to be friendliness. 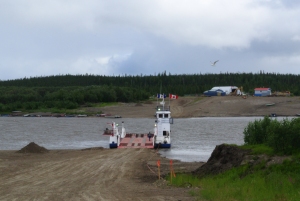 During my brief stay, I have found the residents of Inuvik, predominantly Gwich’in meaning “one who dwells,” and Inuvialuit which means “the people,” to be tremendously friendly. It’s not unusual for a stranger to strike up a conversation on the street or in line at the grocery store. It seems people don’t remain strangers very long in Inuvik. It makes sense to have good relationships with one’s neighbors in a place with mean low January temperatures of -31° C (-24° F) and 30 days of polar night every winter.

The local history is colorful, to say the least. There was the “Lost Patrol,” a doomed patrol of Mounties that set out in 1910, resorted to eating their dogs and yet still perished only miles from the safety of Ft. McPherson on the Peel River. It was also the home of Albert Johnson, the “Mad Trapper,” subject of a bizarre manhunt involving 9 men, 42 dogs (dogs are a big part of life up here) and 9 kilograms of dynamite.

I plan on getting some rest tonight, getting up early and heading the only way there is to head, south, on one more trip down the Dempster Highway.

4 thoughts on “Top of the World”