I was near the Yukon/Northwest Territory border, still well north of the Arctic Circle, with eyes focused on the gravel road surface, when I spotted a dark shape, a large dark shape, out of the corner of my left eye, moving fast against the scrubby green tundra. I turned my attention away from the road long enough to identify it and realized I was looking at ursus arctos, a North American grizzly bear, moving at a full run toward the road and on an intersecting course with the motorcycle. I let off the throttle and eased on the brakes very carefully. Burying the front tire in gravel and dropping the bike would be bad enough, but doing so in the presence of a wild 600-pound apex predator could be catastrophic. This mass of fur and muscle glanced over briefly and passed at a full sprint not 15 yards in front of the bike. Passing close enough that I could see the sunlight reflecting off the individual hairs of its dark honey-colored coat, the bear raced away off the right side of the road, moving with powerful strides across the meadow as I motored past close behind. Then it was gone. I swore into my helmet in an expression of relief, awe, and fear. It was just one last surprise the Dempster Highway had up its sleeve.

I had left Inuvik several hours earlier in a raw cold, but at least it was dry. I had reached the northern terminus of my journey and now it was time to head south. The sun eventually broke through and the highway that only days before had been a nearly impassible morass of mud had transformed into a beautifully traversable, albeit rough, dirt and gravel track through the arctic landscape. I knew that the dispiriting crucible of a road it had been only a few days before lay dormant under this exterior, waiting to awaken again when the rain comes. For now, however, I couldn’t shake the feeling that I had somehow proved my worth on the trip up and now the Dempster was cutting me a break on the way back down. 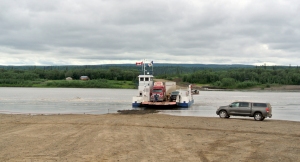 I retraced my route, passing the Yukon border, then the sign demarcating the Arctic Circle at 66° 33’ N, past the lonely outpost of Eagle Plains, and up and over the Ogilvie Mountains, arriving in Dawson City, Yukon 12 hours after setting out. With its gold rush style wooden buildings and dirt Main Street, it felt like entering the Emerald City after so many hours of lonesome road.  I’ve now officially started my journey southwards on the Panamerican highway.

I’ve been as far as the road will allow in one direction and now it’s time to work toward the distant goal at the other end. I’m glad that this exhausting and technical part of the ride is behind me. It is one major challenge out of the way. The challenges ahead are sure to be many and varied, but I will always remember the challenges of the far north with special sentiment.

Like the run-in with the grizzly and, indeed, the road and region itself, it was immense, beautiful, humbling, awe-inspiring and more than a little frightening.

2 thoughts on “The End and Beginning of the Road”