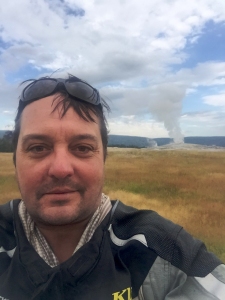 I checked out of the aptly named Ho-Hum Motel early and got to the gates of Yellowstone National Park just before 8 o’clock in the morning. The early departure was based on the warnings I’d received the night before about the heavy traffic and the possibility of fistfights erupting over spaces in the Old Faithful parking lot. Not only was it still the summer tourist season, but it was also the middle of the two-week celebration of the 75th anniversary of the Sturgis Motorcycle rally in neighboring South Dakota. This means that practically every Harley Davidson in North America was either headed to or headed from the region. Which raises a point.

Every motorcyclist I have met on the trip has been great. So far, I’ve met people from all over the United States and Canada. They’re all out there on the highways, living the dream and exploring the continent. I‘ve shared many great stories with these folks after a long day of riding. That’s why I was surprised to see several “Motorcycle Friendly” signs in the windows of motels along the way.

“Why wouldn’t they be?” I thought, seeing as how most of the bikers I met were more “Brady Bunch” than “Wild Bunch.”

Like anything else, though, it only takes some bad behavior by a few to create negative impressions.

While in the parking lot of the aforementioned Ho-Hum, giving my bike a quick once-over before the next morning’s departure, a group of bearded and leather-clad riders spilled noisily out of the Slippery Otter across the street. They mounted their bikes and the one that I presume was the leader pointed his finger to the sky making a circling motion. The group began to whoop and yowl as he yelled, “Let’s Roll!” In unison, fifteen motors roared to life, unnecessarily rolling on and off the throttles and creating an acoustic barrage at the equivalent decibel level of a carpet bombing campaign. I’m sure they were nice guys just having some fun, but I can also see why certain business owners might not be so “motorcycle friendly.”

The following day as I walked through the parking lot by Old Faithful, I saw a group of five Honda Goldwings proudly flying Australian flags from behind their rear seats while pulling out in formation. The lead bike was blasting “All Night Long” by Lionel Richie. That’s how you do it. If you’re going to cause a spectacle, at least make it funny. 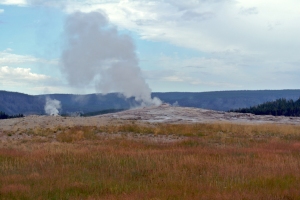 I enjoyed the rest of the park, encountering little traffic and happy that I got an early start. As I left, I clocked the line waiting to get in at the South entrance at nine-tenths of a mile. I was soon out of the mountains and forests and on the high plains of Wyoming. That’s when the wind started.

The sign read, “HIGH WINDS NEXT 3 MILES.” Unfortunately, the party responsible for the sign had underestimated the distance by a factor of about 100. The wind whipped across the treeless landscape at a 90° angle to the road, creating a brutal crosswind that tried its best to shove the Triumph into oncoming traffic. Huge snowdrift fences and stunted vegetation suggested that the winds probably howl like this every day all year and have been doing it since before the great herds of buffalo roamed these parts (which may partially explain why buffalo always look grumpy). The high aspect of the Triumph and luggage made the wind situation even more irksome and I was forced to ride with a constant correction to the right, causing cramps in my wrists and hands. The crosswind combined with the forward motion of the motorcycle also created a unique vector that actually held my right nostril blown shut. The situation and sensation was so absurd that I found myself laughing in between curses as I battled to keep the bike in the lane. I checked into a motel where I liberally applied lotion and Carmex to my chapped face and lips. 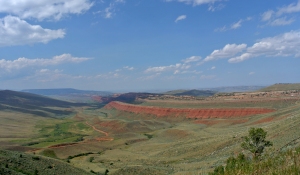 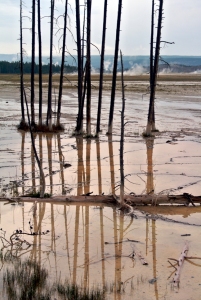 There are another three hours of high plains winds ahead until I reach Colorado. Once there, I’ll be meeting some dear old friends. Some of them will be joining me next week on BMW GS1200 motorcycles of their very own for a multi-day motorcycle camping tour of the Rocky Mountain State. It should be fun!