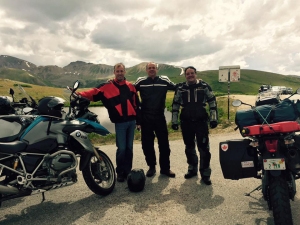 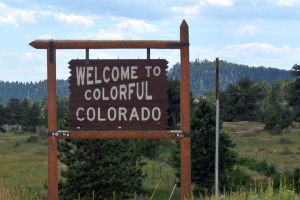 I haven’t posted on the blog for a week, as I lost track of time while spending time under just such circumstances. I spent a few days visiting with friends in Vail, sailing on Lake Dillon at 9,000 feet of elevation and riding Rocky Mountain National Park’s spectacular Trail Ridge Road, which crests at 12,183 feet and provides an unmatched vista of the Rocky Mountains. 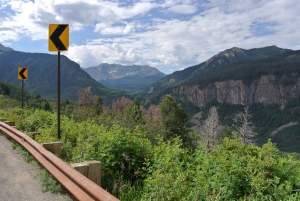 The following weekend I took a whirlwind trip of the Rockies with my friends, Don Weaver, Luke and Leia Wolstenholme and their six year-old son, Max. Luke and Don rented BMW 1200GS adventure bikes while Leia and Max rode in the support vehicle carrying coolers full of wine and shish kebabs, and other camping essentials. After battling traffic on Interstate 70 (Colorado has a lot more cars in it than when I lived there), we crossed Independence Pass, another one of Colorado’s dizzying mountain roads, and descended into Aspen. We camped near a weird hamlet called Marble where many of the summer residents live in tents near a construction site and work at the only restaurant in town, a barbecue joint that is only open in the summer.

Getting to our campsite, located up a perilous jeep trail, required comparable logistics to landing the 1st Marine Expeditionary Force. The task required transferring the gear from the motorcycle into the Range Rover, making two trips up the aforementioned trail, removing the gear (including tents, sleeping bags, fishing poles, grill grates, coolers and other assorted items), carrying these items up a short but muddy trail and finally setting up camp. The payoff was sitting next to a campfire by a secluded lake, grilling shish kebabs and drinking wine with friends. We passed the evening by a secluded lake up a canyon while watching bats swoop through the campsite and later that night I fell asleep looking at the stars through the roof of my tent, listening to the river on the other side of the hill. 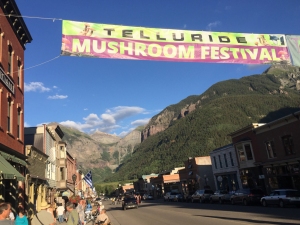 The following day took us on another scenic ride to Telluride, located up a magnificent box canyon and, incidentally, the site of Butch Cassidy’s first bank robbery in 1886. It is also the home of the Telluride Mushroom Festival, which just so happened to be underway when we arrived. This festival of fungus celebrates all things mushroom related. Tables full of mushrooms, harvested from the mountains surrounding Telluride, draw an interesting mix of foodies, presumably there for the edible varieties, and aging hippies with grey pony tails, and woodsy, elfin-looking people who are presumably there for the psychoactive varieties. This combination of prosperous-looking folks togged out in high-dollar outdoor gear, the elder statesmen of the hippie movement, and people who look like extras from the Lord of the Rings movies make for some world-class people watching. 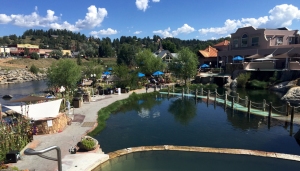 The next day brought another great ride (though I could have done without the hailstorm), to Pagosa Springs. There I spent the afternoon soaking in the mineral springs and spending one last night in a luxury suite with my good friends. After saying our goodbyes the following morning, it was back to the solo life of campsites and motel rooms and onward to New Mexico.